Finally we made the trip to Bako National Park during the Gawai holidays. The park has a good variety of wildlife & vegetation in addition to its beach facade, so it would be a good place to experience the flora & the fauna. Transport wise, the park is easily accessible via a short boat ride from the Bako fishing village, which takes around 40 mins of car drive from Kuching city area (37km).

Within minutes, a large pink jellyfish was spotted just 3 feet away from where i stood. The boys (and parents) were certainly uncertain about that floating object that had beached itself, & for a while no one dared to touch it save prodding the poor pink gelatinous mass, shooting it (water gun), &  throwing twigs at it. Sorry Mr Jellyfish!


I was glad to see some common seashells (Boring Turret snail) on the beach. At least, they were not completely looted away by some ignoramus and/or self centered individuals.


We stayed overnight & had pre-booked our stay at the Forest Lodge Terrace Type 5. The cost? RM100 (USD26) per night. I have to admit after reading TripAdvisor's poor-mediocre review about the park's overall hostel lodgings, I was a bit apprehensive about what we had gotten ourselves with. After all, the angmoh backpackers have paid such a nominal fee, what was there to grouse about? Maybe I was expecting the worst. So, one can imagine how I felt when I saw this:
Good? No? Yes? Yes. I was pleasantly surprised with our concrete residence.

The room was large, furnished with 4 single beds & en suite bath & toilet. The standard single beds were fitted with clean sheets, blanket & pillow. Two fans swing ahead, with a couple of dim amber lights lighting. Green linoleum floor, two electrical sockets, a large mirror in the sink area. Just that. At RM25 per bed, it is a steal for a group of 3-5. Not bad.

Not bad, yes. Did I miss something to tell? It depends. If you choose to compare the room with its counterpart standard hostel/hotel downtown, you sure gonna miss somethings. And that means no air cond, no hot shower, no free coffee/tea, sans furniture (nil in the room, at least). So for those that takut panas, the bare ventilation (slow fan speed) & no air conditioning might just freak out any rednecks that got redder after a whole day trekking in the humid jungle or beach. And just like any beach hostels, it didn't take long before most everywhere was sandy, as everyone plodded in & out with their sandy slippers and clothes. Still, for such a price, it's bearable, if not fine.

Outside, the corridor has some communal tables & chairs for use but just as I was thinking that, a long tail macaque suddenly appeared & gave a most undignified welcome to us visitors by pissing on the handrail of the terrace corridor. Eeww... and That was the end of any desire for languid lingerings outside. At least, for me.
The macaques are very used to humans, but that does not make them any docile or tamer like your average doggie or kitty cat. In fact, they can act like outright gangsters that stalk, bar your pathway, & grab your food. What can I say? You are dealing with a generational elite group of peragut (snatcher), ready to do hand (feet, & tail) combat if needed. Knowing this, the park has emphasized a lot on personal belongings safety, & keeping the window closed & door locked especially when away.
This was a leisurely trip with the family, & we planned for a short mid-day trek, the beach area & then the night trail. The jungle gets dark real early, so at 4 pm, the trail area already had a dim look & an isolated feel to it, & so we just did part of the trail along the way to Teluk Delima which would have taken us about 45 mins to reach there. We saw some animal hoofprints (possibly wild boar), giant pandan leaves, durian-like trees, among others. Nothing much as we only tackled the beginnings of the trail. I guessed much of the excitement happens at night.

Which was right, because most of the wildlife starts its active lifestyle during the night, & that's when we would expect to see more activity (animals) rather than day trail. For the night trail, we registered for the guided tours at RM10 per person. Which was great, because we definitely saw more in the night, got to learn about jungle stuff from the experienced rangers, all along a trail that took 1.5 hours to complete. So we saw fireflies by the mangrove forest by the beach, gentle wildboars, insects, vipers, roosting swallows, & as such.

Some interesting things we saw on & around the island:

1. Ulat Bulu Hitam  (Black Bristly Caterpillars)
There are a number of bristly caterpillars in Sarawak, & they produce defensive chemicals that can be highly irritant, even venomous. Rule of the jungle: Stay away.

They can eat up an entire tree (the leaves) & hang around looking like this creepy black furry patch:

And here's how Gross looks like - up close. No, don't want personal. And this is not your average innocent bug. The Gross can be aggresive, & will attack when prodded (or accidentally stepped on). Ask me, I know. And some parts of the bristles are not soft or furry like what it looks. It's quite stiff. Like brush bristles. Laced with toxins, it'd probably be painful if kena innoculated by it. Like kena call 911. And arrange emergency boat ride back to civilization.
3. Jungle Frogs

This cute kermit is no bigger than your thumb. 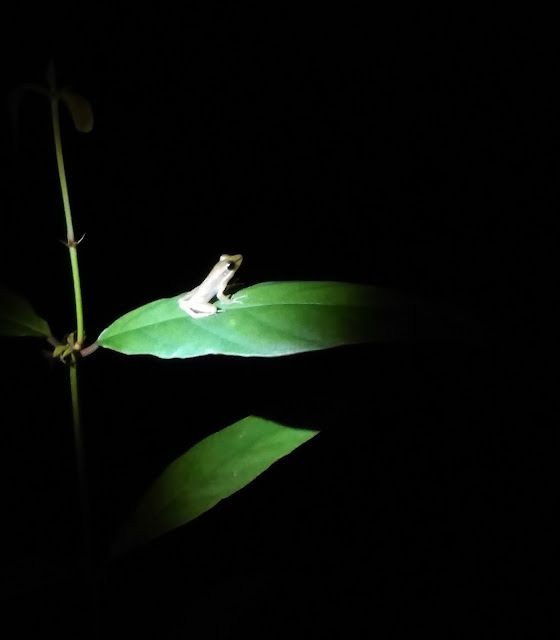 3. Roosting Swallows
And nearby an XL-sized spider in this small cave. 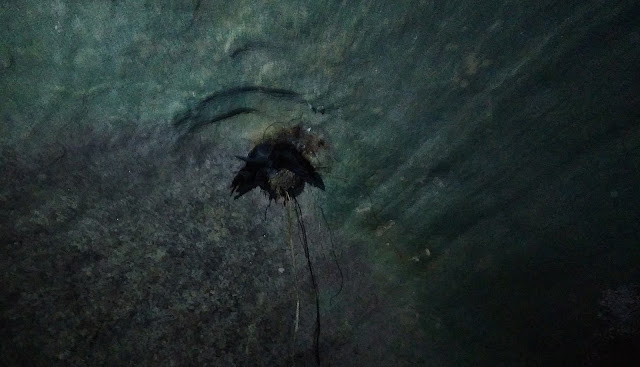 
And in a small pond nearby, a school of catfish.

And who would have thought that the scorpion could land 30 feet up on a tree? Can't imagine what it's like if that thing dropped on the head (shudder). At that point, I wondered if I could get out unscathed from a night in the jungle with just a T-shirt & a pair of shorts. Probably get mauled by the mosqies first before anything else does.

5. The Rainforest & Other Vegetation
Bako National Park is an incredible legacy of Sarawak, known to have 25 distinct types of vegetation forms from 7 ecosystems covering over an area of 2,727 hectares located at the tip of the Muara Tebas peninsular.

Even though it was just an overnight trip with a short trek here & there, we did, I believe, saw most of it, like the beach & cliff vegetation, as well as Mangrove forest along the cove & coastlines; and Kerangas (Heath forest), peat swamp, & Mixed Dipterocarp forest within the trail area. So that is the wonderful thing about this place, so much variety & wildlife, all in one place. 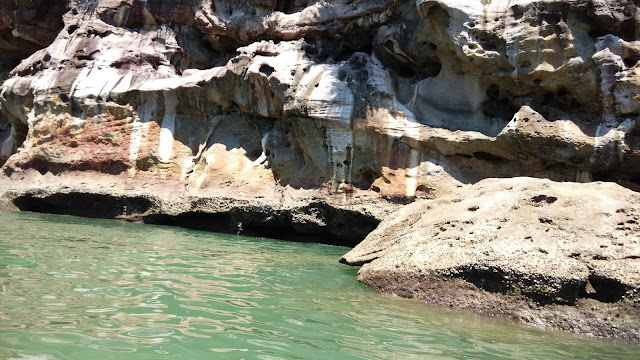 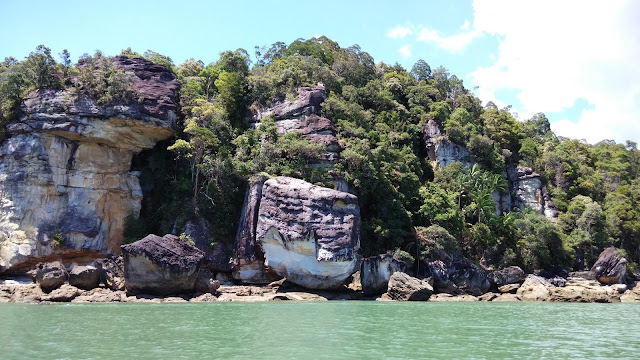 7. Panoramic Rocky Shoreline
Beautiful panoramic views along some of the parks shoreline.

There are a number of sea stacks, but this one (see picture below) is the most famous known of the park. It's actually smaller that what we thought from the pictures we saw, but nonetheless this vertical column is beautiful as expected with its structure & shade, formed & molded over time & water.


9. Secluded Beaches
This one from Teluk Pandan Besar. Can see the macaques (see yellow arrows) hovering around the beach? They were looking for crabs to eat, as told by our friendly boatman.

Here, Mr Teruna, our guide, goes to show & teach the kids a thing or two about our pink friend. Hopefully, the boys will learn to respect nature, & be wise in all they do.

All in all, it was a splendid trip. The inadequacies, thrills & spills (remember the monkey piss?), spiced with a dose of danger made it all the more authentic. Sure, it's not your regular walk in the park. It's better. Loads better. And while jungle things & crawlies do bite, this ain't Jurassic World either.

- Post written in contribution to TripAdvisor review of Bako National Park
Posted by Unknown at 01:38